Vampires of Transylvania: Pray that you won't become their prey. (Vlad V Book 4) 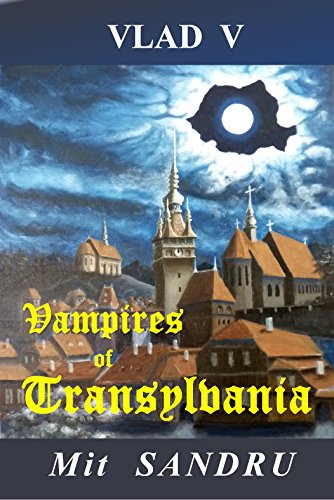 Cat Sanders has a simple task: spread Vlad V Draculesti’s ashes in Transylvania at midnight, during full moon. But it won’t be that simple. Vlad V, and Vlad the Impaler’s old vampire enemies abduct her and her Romanian friend, Dr. Tudor Lupu. While in captivity they discover the Vampire Queen’s proto-vampire and zombie army, which are held in hibernation to be used for mayhem and destruction whenever the queen so wishes.

She and Dr. Tudor might not be allowed to see the light of day again. Cat’s only hope for rescue is her vampire friend, Mundibuto, who is presently in Transylvania. Will they be able to escape from the blood sucking proto-vampires, and flesh-eating zombies, or become zombies themselves?
Action & Adventure
Chick-Lit
Horror
Mystery
Paranormal
Romance
Suspense
Thriller
Vampires
Zombies

Video trailer for Vampires of Transylvania: Pray that you won't become their prey. (Vlad V Book 4)