Dorothy Lyle in Avarice (The Miracles and Millions Saga Book 1) 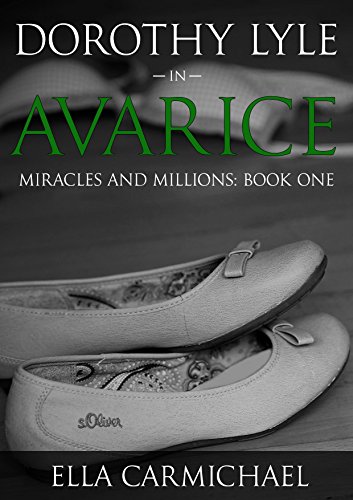 THE MIRACLES AND MILLIONS SAGA

On the day that Dorothy Lyle turns forty she is still single and living a boring, routine existence of a nine-to-five life. This has never been part of her great life plan, and is a niggling and constant source of frustration.

That all changes, along with her life, forever, when she unexpectedly wins a fortune on the lottery and is suddenly propelled into the realms of the super-rich elite. Everything that money can buy suddenly comes within reach for her.

And while Dorothy likes the idea of being rich beyond her wildest dreams, she soon finds that it will bring its own set of problems. A set of problems compounded by her unique and amazing ability.

In the old days when she had been just plain old Dorothy, it had been easy to hide her psychic powers. But now, rich beyond belief, it’s going to be so much harder. When her dreams and visions start to become more vivid and frightening than usual, she wonders if any amount of money can protect her from her own gifts.

Since the age of nineteen she has been aware that a shadowy presence travels with her. This being provides solace and protection whenever the going gets tough, yet seldom provides a straightforward answer to her questions. What do the dreams and visions mean, and why does one particular strange and dangerous man keep appearing to her? The universe is talking to Dorothy, but is she ready to listen?

Book 1 of the Miracles and Millions Saga. A story of hope.

The novels in this series are not standalone and have caused many readers sleepless nights as they plough through all ten, determined to break their own reading record. Check out the boxed set of 1-3, available June 2016.
Action & Adventure
Chick-Lit
Contemporary
Crime
Literary
Mystery
Paranormal
Romance
Suspense
Atheism & Humanism
Gay and Lesbian