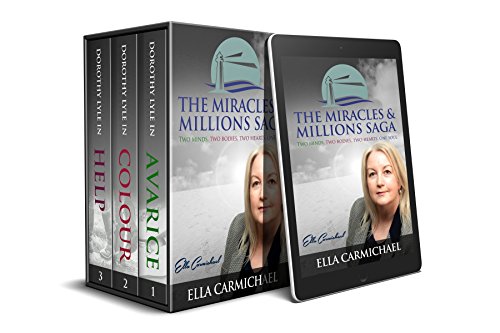 THE MIRACLES AND MILLIONS SAGA

Who is Dorothy Lyle?

She’s a woman who appears super-normal at first glance. She resides in a modest house in a small Irish town, and commutes to a typical office. She’s a lone parent who misses her children now that they are at college. Yet Dorothy is so much more than the obvious. She is a powerful psychic who has been masquerading as normal for twenty years. She is also a woman who has been avoiding men since a nasty breakup and divorce left her reeling in shock while still in her twenties.

The winds of change begin to blow around Dorothy as she approaches her fortieth birthday. An unfortunate affair of the heart means that her daughter, Diane, has distanced herself from her former home and doting mother. Dorothy wonders if some extra cash might alleviate the immediate problem.

Enter the lottery and one hundred and eight-five million tax free dollars.

DOROTHY LYLE IN AVARICE – BOOK 1. Join Dorothy on the first leg of her rollercoaster journey as she discovers what an emotionally charged and complicated experience dealing with unexpected wealth can be. Clairvoyance may in handy on occasion, but it doesn’t help you decide who gets what!

DOROTHY LYLE IN COLOUR – BOOK 2. Relax with Dorothy as she begins to truly enjoy her wealth and changes in fortune. Only for her new-found pleasure to be jeopardised by a tarot card reading of all things! Once again, change is afoot, although this time it’s of a sinister nature.

DOROTHY LYLE IN HELP – BOOK 3. Watch what happens when Dorothy concedes that she cannot protect herself alone, and sets out to hire professional help. Ever wondered what it would be like to come face to face with your other half? The half you weren’t fully aware was even missing. And if he happened to be in a bad mood at that momentous moment, do you think it might colour your judgement? Read on, folks, and find out the answers to these questions and about a hundred more.