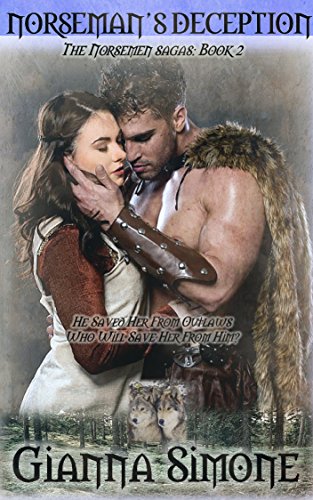 He saved her Life – Can The Gods save her Heart and Soul from the mysterious loner's Dark Desires?

Fearing an arranged marriage, Thora Korisdotter flees her village, vowing never to return. With her two pet wolves beside her, she is confident in her safety, protected by the loyal animals. But outlaws attack, wounding one of her beloved pets. Only a mysterious stranger saves her from certain death. Now in his debt, she must repay him as he asks – with her body.

After being cast out of his clan as an outlaw, Ari Hugisson has wandered for years. The time of his banishment is nearing its end, and Ari has the proof he needs to clear his name and unmask the real murderer – his brother. His journey is delayed when he comes across a beautiful woman under attack. Compelled to save her, he also knows exactly how to claim the debt she owes, using the passion lurking under the surface of her fiery nature.

Betrayal cuts deep with the revelation Ari has lied and knows well the man Thora was to wed. But the passion he stirs is unlike anything she has ever known, even if he insists on treating her as little more than a slave.

When Ari confronts those who would see him killed, will Thora stand beside him, even at the risk of losing her family – and her heart?