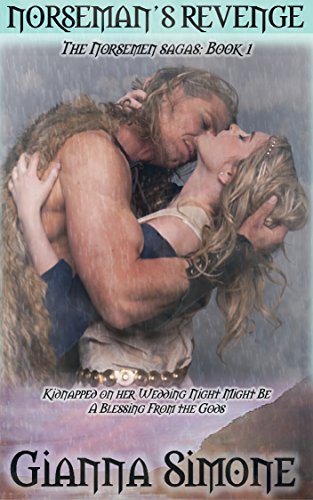 Kidnapped by a Viking raider on her wedding night might turn out to be a blessing from the gods.

Geira Sorensdotter awaits her new husband, but she's filled with doubts about the man and the marriage. Those doubts are forgotten when the village is attacked, her husband is struck down and she is tied up and carried off amidst the raid.

Kori Thorfinnson has waited years to take revenge against the man who murdered his wife. But he soon finds the innocent young woman he's taken as his personal slave is not his enemy, despite her marriage to his foe. Her courage in defying him, her caring heart, and the fiery passion she shares stirs feelings Kori hasn't known since his wife died. Afraid to lose Geira, he binds her to him in many ways – not only with rope, but with his body, his collar and his mark.

Geira quickly learns just how despicable her husband was, and despite her difficult circumstances, grows to care deeply for Kori, her captor. Still, dreams of freedom linger. But once she finds herself with child, she must plan her escape, to save herself and her baby.

However, Kori has plans of his own.