Voices: a novel of the end times 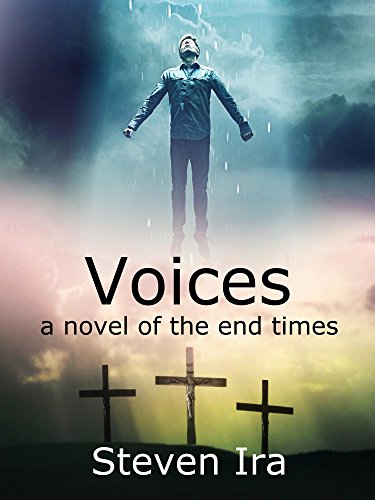 Terrorism rising in Europe and the Middle East...global economies in disarray...tiny Israel threatened by enemies on all sides. Is this old world finally about to die?

In Voices, this question festers just below the conscious level all over the world, especially in light of an event thirteen months earlier when millions of people simply vanished from the earth.

Most of those remaining comfort themselves by playing along with the more or less official explanation—that UFO’s came by and beamed certain people aboard for reasons unknown. But deep inside they realize that explanation is nothing but a convenient fantasy and that in reality an event of Biblical proportions has occurred.

Daniel Goldman is among those who try to ignore the Disappearance. Consistent with his life-long commitment to rigid self-determination, he has pushed the matter out of mind and become even more fanatically focused on his work as an international investor.

But on a Monday morning in late September events outside his control begin to chip away at his comfortable ignorance. Everywhere he goes he finds himself hotly pursued and people wanting things from him he’d never contemplated. As he travels the globe negotiating the largest oil deal on the planet—and as an ancient empire gradually re-awakens—he meets and falls in love with a beautiful Israeli woman. She, together with her family and their rabbi, help Daniel discover he has never really been the “captain of his soul.” Instead, all his life a variety of “voices” have guided him to a single decision with eternal consequences. The Biblical Apocalypse is upon them and, one way or another, Daniel is destined to play an important role in prophesied events.

This novel, the first of a series about the end of this age, shows the world is not coming to an end—only this current evil age is. It also treats the Bible as the inerrant Word of God and presents a plausible picture of the end times according to a literal reading of its prophetic revelation.
Action & Adventure
Apocalyptic
Mystery
Paranormal
Thriller
Religion & Spirituality