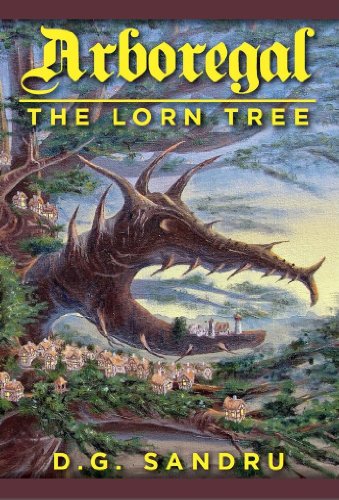 Four young Americans are magically transported to a world where monsters roam the land, magnificent trees support all life, and an evil spirit hunts one of them to fulfill a deadly prophecy.

An experiment in a weird book causes four youngsters, Nathan, Perry, Melissa, and Michelle to appear in an incredibly strange and desolate world. Trees as large as mountains, scattered across the desolate land like oases, support all life, safe from the monsters that patrol the night fog on the ground. Races of people living in medieval societies populate the giant trees. Known as the Lorns in this particular tree, they welcome the four kids into their world—until Hellferata, the evil spirit descendent of Medusa, intrudes upon their beloved tree.

As the kids search for a way home, Hellferata searches for the prophesied mortal superhero she must battle to the death. Suspecting Michelle for this golden-haired superhero, Hellferata sends her son, Dracu Mort, into the Lorn Tree to kill her. Fearful of the evil spirit the Lorns move to expel the four Americans from their tree. Thinking quickly, the kids devise a plan to avoid the monsters roaming the land and travel to the next tree, where it is rumored there may be a path back home. Will their ingenuity, cunning, and courage help them make it to the Cascade Tree and find a way home, or will Hellferata and Dracu Mort mete out their wrath before they can escape?

Imparting the inspiring message that fear is but a passing foil and love is the true answer, Arboregal- The Lorn Tree is a spiritual quest of hope and friendship that exposes the inherent power we all share.
Action & Adventure
Fantasy
Mystery
Suspense
Science Fiction