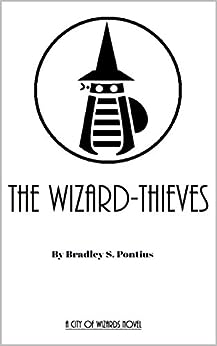 Tommy Guns, Wands, Pinstripe Suits and the orcs that wear them! The first novel in The City of Wizards series, "THE WIZARD-THIEVES" introduces you to an amazing new fantastical world of mystery and magic. If you enjoy crime noire, fantasy, adventure or a combination of all three, then step into a city bathed in magic with a Roaring 20's-inspired setting. Orcs, trolls, elves and more bump shoulders violently to survive in THAUMOPOLIS, the crime-riddled City of Wizards. A world of gumshoe detectives, automatons, spells and gang wars await you. So put on your fedoras, grab your spellbook and welcome to... The City of Wizards.

“Something wicked is happening in Thaumopolis, The City of Wizards. Salrik Strongbow, infamously known as a drunken tough-guy as much as he is for being the only orc detective in the city, finds himself in the center of a harrowing plot. Someone has been abducting young wizards. Kaari Rothenbach, the first orc to be accepted to a big name magic school, has gone missing. And shortly after, the niece of a big time ratman mob boss as well as the sister of Lillian Northup (a reporter for the Tribune) have also mysteriously disappeared. With his partners, the cordial skeleton Rasomil Knotrum and the hyperactive goblin Sneebly, they traverse the twists and turns of The Magical City’s underground and beyond in a race against time to uncover the nefarious… THE WIZARD-THIEVES!”
Detective
Fantasy
Hardboiled
Historical