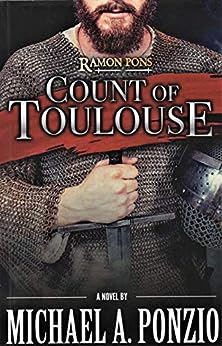 Ramon Pons, a devout knight in the year 924, thrives in his role maintaining the fealty of County Toulouse’s vassals, by diplomacy or if necessary, by combat. When his father, the count, passes away, Ramon has little time to grieve or to fulfill his dying father’s request to found a monastery in honor of their ancestor, Saint Pons of Cimiez. Ramon is coerced by the ruler of a close ally to marry his daughter. After he puts down a rebellion of vassal states, he is ordered to Paris by the King of the Franks to answer to their claims of transgressions. Then external dangers interfere with Ramon’s obligations of raising a family and establishing the monastery. The Saracens raid the coasts, and armies of Hungarian horse archers invade his domains. Ramon struggles to govern Toulouse and continue his family’s legacy.Ramon Pons: Count of Toulouse is one of three novels in the Warriors and Monks series, but the story is complete in itself and can be read alone. The main characters of the novels, however, are connected across generations.
Action & Adventure
Historical
Romance