The Long Way Home from Crete 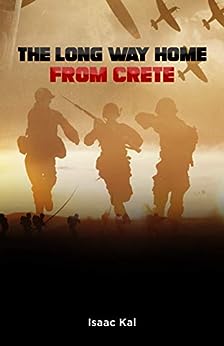 As the clouds of war and anti-Semitic feelings gather pace in 1930’s Europe, Abraham recognizes the danger that he and others are facing and decides to leave his comfortable life in Germany and travel with his family to Israel.
There he intends to make a new life, far from the gathering storm, but life as an exile means a different set of hardships and as a means to support his family he eventually enlists in the British Royal Pioneer Corps, the only unit in the British military where an enemy alien was allowed to serve.
Within its ranks, fighting in desperate battles in Greece and Tobruk, Abraham must find deep reserves of strength and resilience if he is to survive the conflict and return to his wife, Genia, who is left struggling to raise their young son as a single parent in a new country.
As the war drags on interminably, Abraham is left shattered by his wife’s unexpected infidelity. But even greater challenges must be faced by his son, Aaron, who is sent to live in an orphanage. There, his struggles mirror those of his father and he too must find a way to survive the most arduous conditions until they can be reunited.
Based on a true story and linked to the personal account of an Israeli Royal Pioneer Corps soldier, The Long Way Home From Crete is a story of war, duty, love and honor, set against the backdrop of some of the most tumultuous events in history. manually
Historical

Video trailer for The Long Way Home from Crete