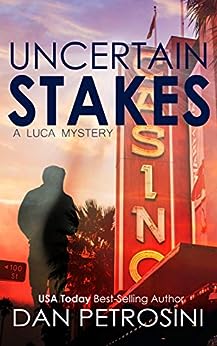 A woman with a lust for risk taking…

While investigating a cold case and juggling family obligations, Detective Luca finds himself at the center of the mysterious disappearance of Beth Wade.

As he unravels the young woman’s life, the list of suspects grows exponentially. A husband, a lover, a disgruntled client, an ex, a criminal, a loan shark—they all had motive to harm Beth, but the evidence against any of them is sketchy, at best.

The truth seems just out of Luca’s grasp, but he’s determined to uncover the truth about what happened the night she vanished.

With political pressure to handle the case sensitively limiting his investigation, and personal concerns weighing down on him, Luca must press ahead and trust his gut…or risk losing the perpetrator forever.

Unexpected Stakes is a stand-alone story in the best-selling, Luca Mystery series.