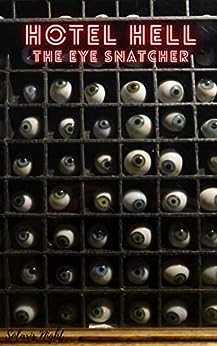 It’s been exactly 1 week, 3 days, and 13 hours since Mack Walter had consumed his last eyeball. He needs them. He needs to see what they’ve seen. To know what they know. He needs to find the truth he was promised.

Frank Castero will find the Eye Snatcher and put him down for good. He was too late to save his beloved wife at the hands of a murderer and because of that, he has spent his miserable life hunting down monsters and now he faces a deranged killer who takes the eyes of his victims while they’re still alive. Frank will not let another person meet that fate.

As Frank chases down the Eye Snatcher, they stumble upon a Hotel. A hotel from hell. You see, the hotel’s guests will discover that the hotel has secrets of its own. Secrets that once learned, may never be unlearned. Once you check into the Hell Hotel, the hotel will take your soul. Will Frank catch the Eye Snatcher before he takes another eye? Will either of them escape the Hell Hotel? You’ll only find out by reading the book for yourself. But be warned, once you know the truth, you cannot unlearn it.

At a hotel filled with secrets, a man arrives with a few secrets of his own. Want to know why they call him the eye snatcher?
Crime
Horror
Romance
Suspense
Thriller