Cleopatra 54 BC: When Your Father Leaves You The Family Business ~or~ Who Let The Scribes Out? 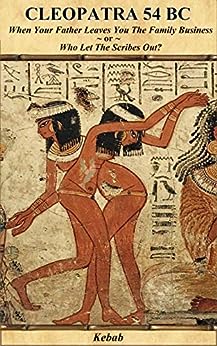 Humorous historical fiction set in Egypt when Cleopatra, at 15, starts to rule with her father (long before Julius Caesar and Marc Antony). Not for the kiddies: adult themes and situations, but nothing graphic.

An out-of-the-box romp through Ptolemaic Egypt, without elitist aristocratic snobbery and posturing. Even Cleopatra, her father the Pharaoh, and Caesar (in Gaul) are all real people: people you'd recognize from your neighborhood ... like that guy who refuses to rake his leaves to stop them from blowing all over YOUR lawn. Immerse yourself in ancient Egypt, which, other than raw technology, isn't really that different from where YOU live... except for residents that are probably more entertaining.

Cleopatra is learning to rule, faced with the bankruptcy of Egypt and a crippling debt to Rome ... all caused by her father. She becomes co-regent then queen, sharing the throne with her father (no fiction, so far). The stories center around her schemes to raises finances, and the personalities of people that do the real work outside the royal court. Women call the shots, men do the sweat labor.

54 BC follows the adventures of two scribes (and a cast of a few) on a covert mission 4000 miles up and down the Nile to the Kush gold fields. Well, one is an ex-witch doctor but it gets complicated quickly. Visit sites up and down the Nile as the pair continually deal with unpredictable situations. Experience how the actual Delphi intelligence network could have been used. Meanwhile, Cleopatra juggles the Romans on multiple fronts, and gets hold of the basics of manipulating people. Caesar, 1000's of miles away, winds up quite befuddled by an untitled teenage royal he's never heard of. 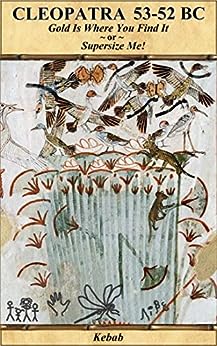