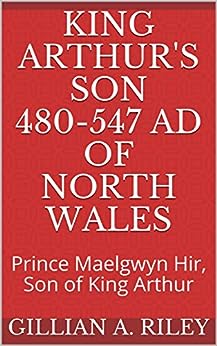 The story, based on fact, begins fifteen hundred years ago in North Wales, King Arthur's strong but beautiful Romanesque Castle at Deganwy, built with granite for strength from Penmaenmawr, white marble for beauty from Anglesey, this stunning yet invincible castle was luxurious having features such as Roman bathrooms and underfloor heating, as befitted the powerful and sophisticated Pen Dragon Line. King Arthur and his son, Prince Maelgwyn, being descendants of the Pen Dragon Line which originated in the North East of England, via the Votadini people, had strong connections with North Wales, came to Wales' rescue when the Romans' left in 420 AD and where they established the Gwynedd royal family, one of the greatest royal dynasties of Wales and the whole of Briton. Connections with today's Royal Family through their Tudor ancestors, should not be took lightly as branches of the Tudor family are known to have lived on Anglesey in North Wales, in the distant past. My story tries to shed light on Prince Maelgwyn, whose name was tarnished, whether it be for power, wealth or political gain. Was he wrongly accused of murder? My short story looks at his situation from a different angle. Could this be what really happened to him?
Historical
Action & Adventure
Mystery
Political
Families
Military
Relationships