Heroes Banging Fat: Will the Prime Minister be able to explain the disappearance of obese people to her quest 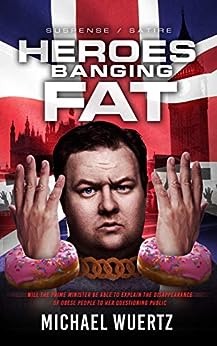 When Victoria Seymour was elected Prime Minister, she had one simple agenda: end obesity to prepare the UK workforce for careers outside the European protectorate.
In the wake of Brexit, Victoria moves into No. 10 Downing Street as the new leader of the United Kingdom. Convinced she is at the pinnacle of her career, Victoria moves towards her noble goal with confidence, hell-bent on ending obesity in Britain.

Unable to explain the disappearances to her questioning public, Victoria follows the advice of her spin-doctors, tightening policies by placing new restrictions on the morbidly obese. What started as a way of coming to power has now forced Victoria’s political career to take turns she never anticipated.

Heroes Banging Fat is a tale of awkward politics, business ethics, psychology, greed, human stupidity and the trauma of brutal pasts, that explores why people would rather believe comfortable lies over hard factual arguments. Laced heavily with irony, this political satire is sure to have you questioning the world we live in today.
Political
Suspense
Thriller
Humour