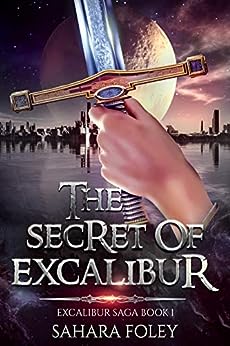 However, one man – accidentally imbued with extraordinary powers – could be the answer to it all.

As visions compel him on a journey involving the legendary Excalibur and The Lady of the Lake, Arthur finds himself in England. The irresistible call brings him to the famous London Institute of Psychic Research, where he meets Ruth.

The feisty, red-headed doctor wants nothing to do with the arrogant American, but her boss and the Commander of MI-6 have other plans. Believing the beautiful scientist is the key to controlling and weaponizing Arthur’s abilities, they force the pair to work together.

Ruth has no choice but to tag along, finding it increasingly difficult to fight her growing attraction for Arthur. However, when a camping trip along Lake George suddenly turns into a military expedition, the doctor realizes the precarious predicament she’s in. And her unwanted partner isn’t the only source of concern.

There are more secrets hidden beneath the dark waters than anyone imagined. And, strangely, unknown forces are causing Arthur’s senses to go wonky. He’s losing control.

Will he be able to recover his powers and prevent WWIII? His next move may determine the fate of the world.

You’ll love this snarky urban fantasy / sci-fi adventure because the twists, turns, and smoldering romance makes you want to keep turning the page.