The Jewish Nazi by John Vocale 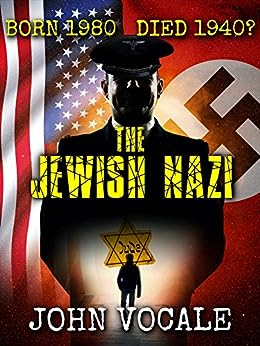 Benjamin Bauman, a contemporary Jewish Orthopedic Surgeon, is blinded by a flash of light while driving his car. When the light subsides, he gathers himself and discovers he is now driving another car in another time period. He panics and crashes the vehicle into a light pole.

After quickly diagnosing his injuries and reestablishing his unbelievable plight, Ben blacks out.When he awakens he finds himself in a Berlin hospital in Nazi Germany.

To the people around him Ben is Karl Schroder, a high-ranking Generalarzt and Chief Surgeon of that same hospital. Ben knows nothing of Karl’s past but, among many other surprises, he now speaks fluent German and discovers that Karl had been very close to an empathetic nurse, Elsa Hirsh, who is tending to his wounds.

Still in panic mode, Ben finds a mirror and discovers that his journey has not physically altered his appearance. Yes, he is a Jew in Nazi Germany, but nobody seems to realize this but Ben. His “memory loss” and sudden knowledge of a new language is “scientifically” attributed to the blow in the head he received during the accident.

From the German perspective Ben’s new language is American English, the language he retained during his trip into the past—a language Karl did not speak.

This miraculous infusion of a new language after a traffic accident intrigues members of Hitler's inner circle and brings the reluctant Ben face to face with the likes of Hermann Goering, Joseph Goebbels, Adolf Hitler and, with a stroke of luck, the famed American broadcaster and author, William L. Shirer.

Ben’s obvious goal is to try return to the present, but as time goes by he feels he was propelled into the past for a yet to be determined mission. If so, what will his mission be? Is he there to kill Hitler––warn England and America of a looming world war––warn the Jews of the impending holocaust––or is it something more benign, like simply trying to stay alive?
Historical
Literary
Suspense
Science Fiction
Thriller
Fantasy