If They Could Shoot Back: Ending the War on Animals 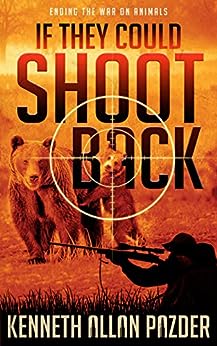 DEATH COMES IN MANY FORMS. NONE ARE GOOD.

This one was in the form of a black-clad ex-Special Forces soldier who looked like he could have stepped out of a Call of Duty video game.

Battling trophy hunters in the vast Great Bear Rainforest of British Columbia, mink farmers in Colorado and animal experimenters in Atlanta, ex-Special Forces soldier, Kenneth Joseph Ares Pearce wages a shock and awe, counter-war to save the lives of the thirty million animals a day that are killed by the Master Species known as Mankind!

But rocking the proverbial boat doesn't come without a price! Pearce quickly finds himself on the Public Enemy Number One list on both sides of the border.

When the FBI illegally renders his beautiful ally from Canada to a supermax prison beneath its headquarters in Washington, DC, Pearce has less than 24 hours to free her before she cracks under the Bureau's notorious "enhanced interrogation" techniques.