The Tales of the Magic Piano 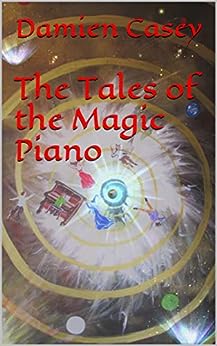 In the shed on uncle Olaf’s farm in Oslo, Henry and Nicolas Christensen discover an old, dusty piano. Curious to play the dust-covered manuscript, Nicolas strikes the mysterious notes, accidentally hitting the keys that open them up to a whole new world. They are transported back in time, space and distance to the frontiers of worlds enduring unimaginable conflict and tyranny. Chasing them through the ravages of time is the evil Grand Wizard of Balthazar and his army of warlocks, opposed by a defiant and determined Queen Shoshana, queen of the northern reaches. Initially sent back in time to the Jurassic period, uncle Olaf, his daughter, Elise, his son, Henry and his nephew, Nicolas discover his long- lost brother, Marius who joins them on an epic journey through the ages. What transpires is a fantastic journey that illuminates the senses, and, boggles the mind. Join Nicolas, Henry, Elise, Nedebiah, the soothsayer and Marius as they travel the stars, the galaxies, and wormholes of time, desperately trying to find their way home.
Action & Adventure
Fantasy
Mystery