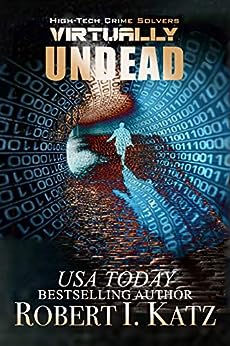 From USA Today Bestselling Author, Robert I. Katz, comes a gripping techno-thriller, part of a multi-author series tied together by an interlocking cast of characters, all centered around the fantastic new promise of high technology and the endless possibilities for crime that technology offers, in a world where getting away with murder can be not only plausible, but easy…if you just know how.

Michael Foreman is a neurosurgeon, hard-working, successful and highly respected. In his spare time, he plays the piano.

Ralph Guthrie is a gamer. He makes his living playing online games. He also plays the clarinet. Ralph Guthrie and Michael Foreman are old friends and play together in an amateur jazz band.

But when Ralph is invited to play and critique a new video game, Virtually Undead, and suffers a fatal heart attack, along with nine other players, it quickly becomes apparent that virtual reality has reached out of the virtual world and into the real.

Why has a gas explosion rocked the city? Why has the New York sewer system repeatedly expelled raw sewage into the city’s waterways? And why does a single traffic light downtown persistently malfunction, causing cars to repeatedly crash?

Are all these things tied together? If so, how and why?

When the NYPD and the FBI ask Michael Foreman to consult, he can’t resist the challenge, and finds himself quickly drawn into the escalating mayhem of a video game that’s becoming all too real.
Action & Adventure
Apocalyptic
Crime
CyberPunk
Detective
Medical
Mystery
Police
Political
Psychological
Suspense
Thriller