It Didn't Start with Trump 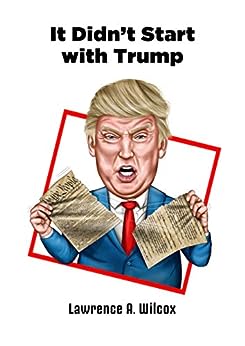 The goal of the book is to inspire change to preserve the future for the United States of America. U.S. political history following World War II has been and continues to be altered, covered up and obliterated. Controlling history is to influence elections to serve the rich and powerful. All three branches of the US government have changed to serve the upper 1% and disregard regulations for the environment and general public protection such as the CDC and FDA. Reductions and elimination of social services for the poor, disabled, veterans, elderly and especially children have been targeted. The gap in wealth between the upper 1% and middle and lower classes has become enormous. Violations of moral and ethical standards and even many legal violations are tolerated for the rich and powerful and when found guilty of crimes the sentences are minimal. The lower and middle classes are held to much tighter codes and punished much more severely. Republicans want to create more restrictions for the non-wealthy and provide tax breaks for the wealthy. The wealthy are continually gaining more political control. Russia interferes in our elections and the President and Republican Senators accept contributions from them block investigations. Political campaigns costs eliminate the probability of winning by the non-wealthy that not selected by the wealthy. Our government has fallen under the control of the super-wealthy. The Republican controlled government is interfering with our daily lives to a much greater extent since the 1970’s. Women’s right and health that were improving with technology are backsliding. Integration and acceptance of all races is hampered with bigotry masked as patriotism and national security. The US Immigration Service has mistreated children and toddlers to punish parents for entering the U.S. Our President sides with dictators over our own intelligence services. Our President alienates our allies and acquiesces to our enemies. The fundamentalist Christians align with a President that brags on sexual abuses. The President nominates and Senate quickly confirms Supreme Court Justices with minimal investigation into their character. Knowing and understand America’s political history is crucial to our future. This book is to present evidence of political coverups and deceptions that have led to Donald Trump becoming President and this state of America.
Crime
Historical
Political
True Story
Social Sciences