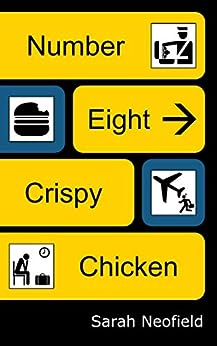 The immigration minister has been detained.
Minister for Asylum Deterrence and Foreign Investment, Peter Ruddick, is en route to the remote Pulcherrima Island, the site of his latest privately-run, fast food chain-inspired detention centre. But chaos ensues when Peter misses his connecting flight and finds himself confined to the visa-free zone of the Turgrael airport, without a business lounge in sight.

Stranded in a foreign territory with nothing but McKing's Crispy Chicken burgers to eat and nobody but a bleeding heart liberal, his seat-mate Jeremy Bernard for company, Peter's misunderstandings of Turgistani language and culture result in his arrest on suspicion of terrorism, perversion, and espionage. Peter has always had the power to get away with just about anything, but how will he sweet talk his way out of this one? What if he winds up - like those in his centres - indefinitely detained?
'Hilarious' and 'powerful', Number Eight Crispy Chicken is a carefully researched, funny, and thought-provoking read for fans of the social novels of Tressell, Orwell, Dickens, and Vonnegut.

Grab your copy of Number Eight Crispy Chicken today, because this is one trip you won't want to miss!

'I have never been transitioned from hatred to empathy more skillfully by an author. It cuts away all artifice and ideology to expose the raw but crispy human in each of us.
' - Dr. Joanne Sullivan