FART BOOMER'S LET 'EM RIP BUTT BLASTER GANG!: IN A TALE OF . . . THE FART BOMB THAT SAVES A WORLD 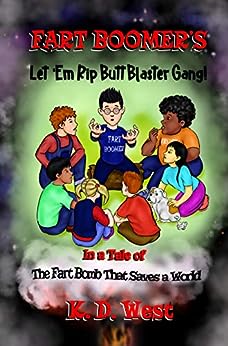 A year has passed, and the time has finally come for Sophia Petros and Arabella, her naughty best friend who is a 5th Dimension butterfly fairy, to go on an ‘out of this world’ adventure together! Sophia was left behind while her sister, Shelby, went on the first adventure with Arabella. Now, Sophia is allowed to go on one of her own, and the girls travel to a parallel Earth reminiscent of the 1970s of Sophia’s world.

In a quaint western town called Durango, Colorado, Sophia and Arabella befriend a group of ranch cowboys, including Colton – with whom Sophia feels an immediate connection. Arabella and Sophia soon discover just how this world differs from Sophia’s – animals talk, trains fly, and living spacecraft cruise the skies.

Meanwhile, near Durango, a portal opens at the legendary Chimney Rock, and something strange comes out. A hungry, injured, and anxious creature makes his way through the portal and flees towards Durango. Netherworld Overlords from the other side of the portal in the Underworld, enlist a galactic bounty hunter to find this creature called a Berserker. To complicate things further, these deities discover that a magic warrior helmet – a possession of the war god, Mardukus – has disappeared at the same time!

Can Arabella, Sophia, and their new cowboy friends turn a bleak situation into something positive with their compassion and kindness? What is the mysterious connection that the Berserker unknowingly has with the magical warrior helmet, and the reason the Netherworld Overlords are so desperate to get them both back? And can Arabella rescue the Berserker from the Netherworld and return to Sophia?
Action & Adventure
Fantasy
Mystery
Paranormal
Romance
Suspense
Humour
Travel