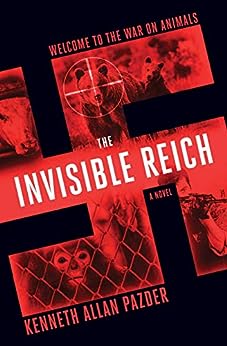 WELCOME TO THE GLOBAL WAR ON ANIMALS! THIRTY MILLION OF THEM ARE KILLED EVERY DAY IN NORTH AMERICA ALONE!

Despite these staggering numbers, his travesty remains invisible to most! Something must be done to put the public in the know.

Can one ex-special forces soldier's "shock and awe" tactics force the Master Species hit the pause button on this global onslaught?

Trophy hunting, factory farming and animal experimentation -it's all on display in graphic detail in a fast-paced, edge-of-your-seat thriller that will leave your heart pounding and your conscience wondering.

Read the story of one man's quixotic campaign to save the millions of lives of animals who live and die every day at the whim of the denizens of THE INVISIBLE REICH!
Action & Adventure
Hardboiled
Political
Suspense
Thriller
Military