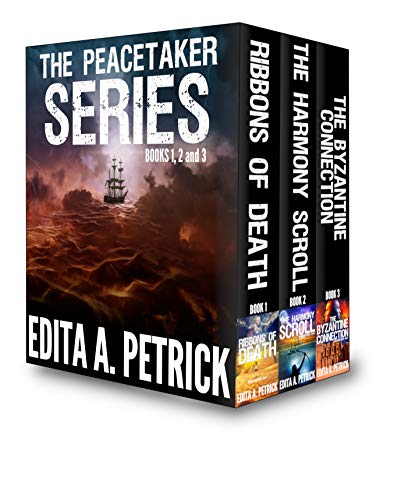 From the US shores to London, France and Spain, death stalks Stella and Carter as they follow the Peacetaker's bloody trail....

Ribbons of Death (Book 1)Three months after surviving a deadly riot in Cairo, Timothy Carter is compelled to track down Stella Hunter, a disgraced academic whose book could be the key to deciphering whether the legend of the Peacetaker is more than a dusty myth. She might be a recluse, and people think she’s crazy, but she’s his only hope to find answers to questions he’s been asking himself since receiving the scars that now mar his face.

The Harmony Scroll (Book 2)
Almost a year to date from the time Carter braved a horrible blizzard just to be able to knock on Stella Hunter’s door, the two are following a trail again—this time searching for a mysterious scroll that a few unreliable historians documented in the course of time.

The Byzantine Connection (Book 3)
Stella Hunter is an obsessive reader of all myths and legends. She and her long-time boyfriend, Carter, go to visit their old friend and priest at his church. There the journey begins when Carter sees an old Oriental couple pray, then leave the worship decades younger than when they walked in minutes before. Their story surrounds a bizarre and poorly chiseled granite statue delivered to the church. But is it just an ugly statue?
Action & Adventure
Apocalyptic
Dystopian
Fantasy
Historical
Mystery
Paranormal
Political
Psychological
Suspense
Science Fiction
Thriller