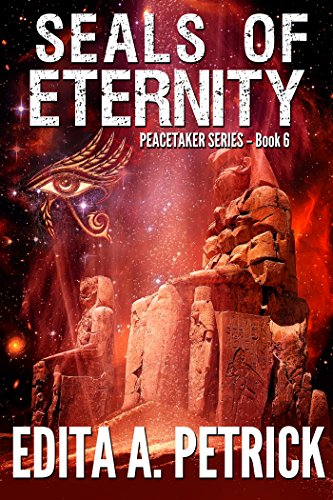 A cruel and mercurial ancient deity, stranded on Earth for thousands of years, has been searching for his means to escape from his earthly confinement. The only two artifacts that will do the job, the Seals of Eternity, have been lost in the sands of time. Sed, the mysterious and shadowy figure of jackal, has killed thousands in his relentless search for the Seals. The 21st century sees him taking over bodies of delegates attending an archeological convention in Miami, in pursuit of the knowledge about the two Seals. The left-handed seal is on exhibit in a local museum. The academic who curates the traveling exhibition is a Serbian war-criminal, hiding under a dead man’s identity. Sed, whether as a shadow or wearing someone’s body, has been tracking him across two continents just to be able to see one artifact that is not only a key to his prison, but a powerful energy conduit linked to all cosmic creation. The problem is that Sed needs both Seals, the left and the right-handed one, to close the loop that will guarantee him immortality…and in the process obliterate his current dimension and all creation in it.

Stella Hunter, although no longer a history professor, has been asked to present a paper at the Miami convention. Her family will be there to lend their support to their gregarious and irascible wife and mother. Since the convention is an international affair, Stella hopes to connect with many colleagues, including her best-friend-and-best-enemy, the San Francisco museum curator, Dr. Abigail McEwen.