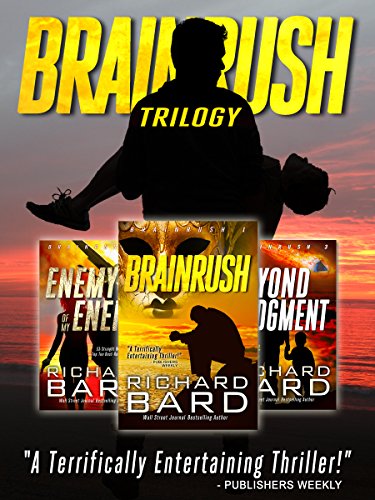 Over 2,100 5-Star Reviews! Called "a terrifically entertaining thriller!" by Publishers Weekly, Book-1 of the Brainrush series was named The Wall Street Journal #1 Bestselling Action/Adventure in their Guide to Self-Published Big Sellers, while Book-2 held a death grip on the #1 or #2 slots of the Amazon Top-Rated (best reviewed) Mystery/Thrillers list for 10 straight months. This set the stage for the blockbuster release of the final book in the trilogy, which was heralded by Suspense Magazine as "part science fiction, part thriller, part suspense, part love story, and part mystery. It's got it all and that's what makes this novel one of the best."

An ocean away, Luciano Battista wants a piece of Jake's talent. Posing as a pioneering scientist, the terrorist leader has been conducting cerebral-implant experiments in a sinister quest to create a breed of super jihadist agents...and Jake's altered brain may be the key to his success. But Jake refuses to play the pawn in an unholy war--and when an innocent woman and autistic child are taken hostage to force his cooperation, he embarks on a jihad of his own. Jake and his band of loyal friends are thrust into a deadly chase that leads from the canals of Venice through Monte Carlo and finally to an ancient cavern in the Hindu Kush mountains of Afghanistan--where Jake discovers that his newfound talents carry a hidden price that threatens the entire human race.

The wild ride continues through books two and three of the trilogy, with locations that include the beaches of California, a raging underground river in Mexico, the rain forests of Venezuela, the Mediterranean coast, the Swiss Alps, and finally to a secret southeast Asia island, where Jake must lever every scrap of his failing brain to prevent an apocalyptic disaster.