Coach to Como: A Reflective Coach Trip To Lake Como, St Moritz And Milan, Poured Out In A Stream Of Consciousn 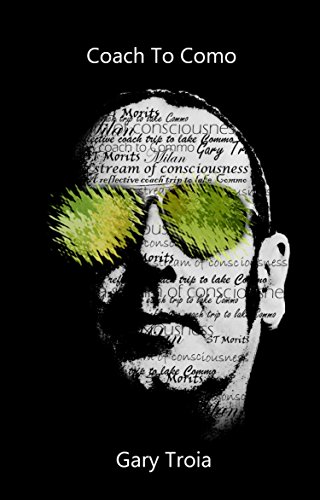 Gary Troia is a writer, he has also been a bricklayer, a teacher, a philosophy student and a sufferer of several disorders, including: manic depression, alcoholism, fear of flying and a dislike of most people.

After Gary announces that he will no longer fly, his wife, Poppo books a coach holiday to Lake Como. One week later, with the newly acquired kittens dropped off at the cattery, Gary and Poppo embark on a twenty-four hour coach journey to Italy.

Gary always believed the restless, relentless, impossible-to-satisfy voice in his head was one of his greatest assets. It spurred him on. For a while, his strategy worked. But soon the energy of raw emotion would dissipate, and he would be back where he started. What happened next was completely unforeseen. Through a bizarre series of events - involving gangsters, the ICF, deportation from the States, Christian cults and the AA - Gary stumbled upon something that helped him tame the voice in his head: inspirational books. He spent years reading them before having a quiet revolution. Gary’s life was not transformed into a thing of beauty, but he did gain a passion for daily reflection and meditation. While the book itself is a narrative account of a journey to Lake Como, The coach to Como is ultimately the story of survival, recovery and evolution. The book is well crafted, with various threads being skilfully interwoven to give a colourful but incredibly honest account of the journey Gary has undertaken since he came to terms with his ego, his internal struggles with life, loneliness, rebelliousness and self-destructive behaviour.
Contemporary
Literary
Philosophical
True Story
Biographies & Memoirs
Humour
Religion & Spirituality
Self-help & How to
Travel