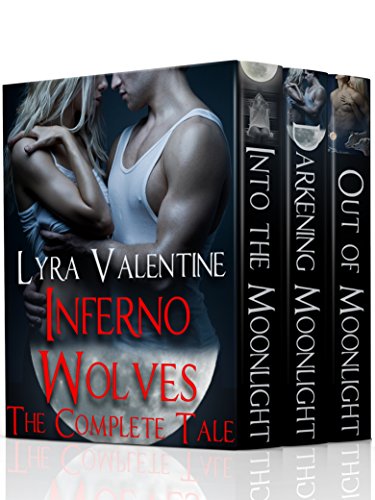 Book One: Into the Moonlight

Stella Carlson didn’t think she’d ever recover from her breakup. That is, until she meets sexy and mysterious Xander Dante. Stella feels Xander pull at something inside her, something she never knew existed. Now she’s torn between discovering the dark and dangerous part of herself Xander brings roiling to the surface or running away to a safety that just may be an illusion.

Stella Carlson never expected to see her ex after he disappeared months ago. A sizzling reunion is in order when Derek Shore appears unannounced in the middle of an argument between Stella and her new boyfriend, Xander. The returning Derek is leaner, darker, and intent on hiding a secret from Stella. Her own wolfy secret opens a rift between the two. Powerful Xander Dante is more than willing to fill that rift, but only if Stella will commit herself to the pack. Now Stella must choose between the comfortable familiarity of an old life or the thrill of starting a new one.

Book Three: Out of Moonlight

When Stella Carlson is confronted with the truth of Derek Shore’s betrayal, she turns to the only person she knows is powerful enough to help. Irresistible Xander Dante continues to draw Stella to him, even at the expense of his own ranking within the pack. Xander commands the Inferno Wolves, and they wade into battle against the cutthroat city werewolves in defense of Stella. Will Xander and Stella come together once again, or will Derek tear them and the pack apart forever?

Out of Moonlight concludes the story of Stella and Xander. The Inferno Wolves will return with new faces and challenges!
Paranormal
Romance